Korg announced the new Monotribe at Musikmesse this year.  A simplified Electribe with the popular MS-20 filter clone and fully analogue 1-OSC synth (rebirthed first by the Monotron) + drums. Some details were leaked just days prior (semi-interestingly, leaks that seemed engineered by Korg) and then after release some basic specs and videos were made available. However, due to the poor quality of the demonstrations and the fact that the floor guys didn’t have any decent time with the machine before the show, not much else has been made clear. Alot of questions linger.. Thankfully, one of the floor-reps recently posted more information to the Korg Forums, I’m going to round up his info with the additional info that’s scattered around the net. 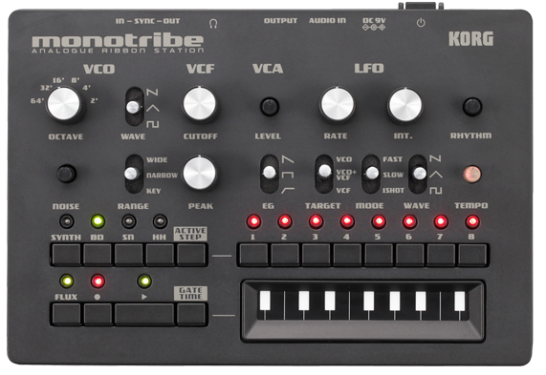 Analog synthesizers of yesteryear were prone to drift in pitch. But no more! The monotribe’s auto-tuning circuitry provides stable chromatic playability, and will not go out of tune. This auto-tuning technology also means no warm-up time, no servicing for pitch calibration, no sensitivity to temperature changes – just the great sound of analog VCO.

Classic Analog Components – VCO, LFO, VCA
The VCO offers a choice between sawtooth, triangle and square wave. White noise can mixed in to the oscillator signal in any amount. The Octave selector covers a broad range, from deep bass to piercing lead-lines. Three EG (Envelope Generator) presets provide the VCA with impressive versatility and dexterity. The LFO can be patched to the VCO and/or the VCF, creating impressive dynamic effects. The Range switch allows the LFO to deliver stirring cyclic changes over tens of seconds (SLOW) or superfast (FAST) audio-range FM ringing. Switching the LFO Mode to the 1-shot setting allows the LFO behave as a second envelope generator.