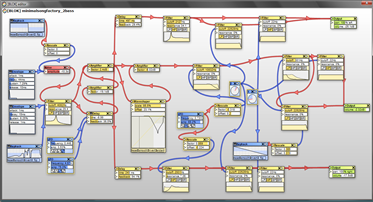 The upcoming release of Blok Modular has been announced. Blok is a modular plugin for audio hosts (VSTi + Buzz formats with Effect versions planned for near future). It holds similarities to other synth building modulars like SynthEdit, SynthMaker, Reaktor and so on.. but where it breaks from those molds is its primary focus on classic modular synthesis, an intuitive interface, speed and ease of use. Its approach is simplified and more refined soley towards synthesis than the forementioned applications/plugins, but beware of misinterpreting that as meaning it lacks power or flexibility because those are it’s direct aims. There are 4 basic types of Bloks; Generators, Modifiers, Controllers, and Outputs (which also includes global bus effect bloks, signal analysis bloks, and others).

The launch is coming soon, but there is a freeware version of Blok already for Buzz modular (also freeware) and a Save-limited Demo VSTi currently available for any VSTi-compatible host.  It’s going to be crazily affordable already, but apparently smart people will be available to get in on an Early Bird special discount price (35 euros).

Anyways, that’s enough information from me, if you want to learn more visit http://www.blokmodular.com/.

The screen-shot above shows a project I recently made, it’s a setup that uses multiple Keytrack modules to split it’s Note input through different paths and control over the modifiers (a sort of multitimbral + filter tracking combo). Check out the audio below to hear what the example sounds like, everything in the recording is done via the Blok patch shown above plus an additional Drum machine Blok patch I created.

One of the cool things about Blok is that it fully supports copying and pasting of Blok data across multiple instances or from other sources. For example, if you want to try out a Blok from a site or friend, you can literally just copy and paste the XML data into Blok.  Open a Blok window then paste (Shift+V), it’s that simple… TIP: To avoid conflicts with VST loader and Host short-cuts, Blok’s editing shortcuts have been moved from the CTRL key to the SHIFT Key, so to select-all/copy/paste/undo, etc. use SHIFT-C, SHIFT-V, SHIFT-A, SHIFT-Z and so on.

If you check this patch out.., make sure you play across all the octave ranges. The splits are designed for different sound designs/drills/etc. with the lower octaves focusing on bass and the high-mid (6/7) focusing on trills. To paste it as text into Blok,  just click the link then copy the XML contents into your clipboard,.. otherwise use Save As and open it as a Patch.